Here is a quick rundown on how to add a Twitter Tweet button without using a plugin. This article will explain how to implement the code, and how to customise the look of the button and the content of the tweet when clicked.

As you can see that when clicked a dialogue box will appear. 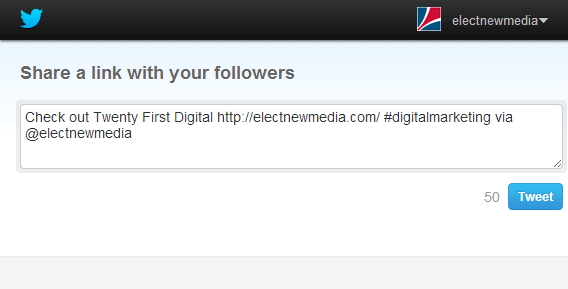 There are two parts to adding a Twitter Tweet Button to any WordPress file. Our recommended method is to add it to the header as this Twitter button will tweet a general tweet about the domain rather than the page you are visiting. This is great for showing that X number of people have Tweeted your website rather than having just X number of tweets about each individual page. It gives the impression that more people socially approve of your site and content.

Code A: You need to add this code after the closing of the Header element and before the opening of the Body/Content element. Go to your theme files and open the Header.php file, make a copy of the contents to act as a backup just in case, then just after the closing header div element you need to add the following code. (This code is added to your website only once regardless of how many buttons you have per page).

Code B: Once you have added Code A you need to add the following piece of code where you want the button to appear. As we mentioned above we recommend you add this to the header on all your website pages. This way you can boost your social approval rating across the whole of your website. This code is best added to the Header.php file, located just under Code A.

In Code B, here are what each variable does:

In Code B, here are the variables we use:

Here are the options for the variables data-count and data-size – the following examples are changes to the code of Code B.

Here are the three options for data-count.

Here are the three options for data-size.