How Do You Choose a Career When Robots Will Do Basically Everything?

As the dawn of artificial intelligence (AI) fast approaches, young people and professionals face a genuine dilemma. What career are you supposed to choose when technology will gradually take over just about everything?

Sure, there will be some jobs that are immune – at least temporarily – to the robot revolution. But it’s scary how many careers already have question marks hanging over them. So what does it take in the modern age to forge a career that will last until retirement?

Even safe bets are in danger

Once upon a time, the assumption was creative jobs would always be safe from any AI takeover. Well, you can kiss that idea goodbye. Because the machines have already made their way into journalism – one of the careers ranked least likely to become automated, according to research by Oxford University.

Associated Press is one of the first publications to call on robots to write sports reports. It’s not exactly Pulitzer Prize winning stuff but it’s easy to see how much of journalism could in fact become automated.

It’s not only journalism that’s in the firing line either. Look out web designers and developers:

For the first time, it seems a genuine possibility that machines could one day programme video games, design architecture and write instruction manuals. Tasks that once seemed too creative for automation suddenly look a lot more formulaic.

Surely, public services must be safe?

Actually, no. In fact, these careers have been slipping off the radar for quite some time. Self-checkouts have been replacing staff in supermarkets for so long now they seem primitive. Things are about to get more hi-tech, though, because Japan’s determined to put hotel staff around the world out of a job.

In a world where you can be checked in by an extra from Jurassic Park, surely there’s no such thing as a safe job. Even the poor old porter has been replaced by a trolley with a sat nav strapped to its side. Still, at least there’s no need to tip the thing.

Meanwhile, Google has waged war on taxi drivers, truckers and just about anyone who works behind the wheel. Turns out Google’s self-driving cars are safer than us clumsy humans – and they don’t need to stop for pee breaks.

You can expect the same thing to happen for public transport, too. So, if you come from a long line of bus drivers in your family, you may have to break it to poor old dad you won’t be following in his footsteps.

So creative jobs aren’t safe, neither are public services and the list of industries being automated continues to grow: healthcare, food, education, law, telecoms and more. So are we all doomed to a future of unemployment and self-reflection on where it all went wrong?

Coping with the rise of machines

If we calm down for a moment and stop predicting the AI apocalypse, we’ll realise human kind has been through all this before. Before the industrial revolution, just about every conceivable task was undertaken by people. Then steam engines started moving stuff for us, printing presses started publishing books and machines started weaving our snazzy clothes.

It was the end of civilisation as we knew it. Except it wasn’t and everything basically turned out fine. In fact, a plethora of new jobs were created in the form of mechanics, engineers, machine operators and first of those jolly bus drivers we’ll sorely miss. Technology also replaced some of the most dangerous careers – not only life-threatening jobs, but repetitive labour that led to long-term injury and troubles later on in life.

Admittedly, it’s hard to imagine how robot dinosaurs are saving human receptionist from immediate danger, but let’s not spilt hairs.

How to craft yourself a future-proof career

As AI becomes more prevalent across all industries, there’s an element of luck in terms of choosing a career that will last. It doesn’t matter whether you’re still in school, yet to choose career path, or halfway through your working life – this will affect all of us.

In fact some have said a mixture of AI and robots could take over 50% of jobs currently done by humans in the next 30 years. That doesn’t take into account the new jobs that will be created by technology, though. The only trouble is those careers will be more technical than the low-skill jobs they replace. So what’s a human to do?

The theory that creative jobs will be the safest from technology’s takeover is sound. The problem is we associate trades like journalism and online marketing with creativity when they’re actually quite formulaic. Word processors have been correcting grammar for decades – quite poorly, admittedly – but those rules can be learned. And the quality of grammar apps being developed now is pretty impressive.

Likewise, marketing decisions rely on scores of data and patterns that are now starting to be interpreted by machines. Persado is already scripting marketing messages for some of the world’s biggest brands, while other platforms are choosing and placing ads across the web.

Until now, these have been considered creative decisions only a human could make. But we’re starting to see how formulaic we really are and how much of what we do could be automated.

So what will still be considered creative in 50 years’ time? Well, assuming AI hasn’t advanced so much it can create its own ideas, then innovation will be the peak of creativity. Not repeating the patterns people/machines have followed countless times before, but generating new ideas. Think technology innovators, entrepreneurs and professional problem solvers. These will be the creative minds of the future but machines will be carrying out much of their plans.

Become a master of the machines

When technology creates new jobs, it’s normally because it needs someone to look after it. Maintenance, repairs and servicing are essential for the latest advances in technology. Google’s self-driving cars and automated lorries need a human behind the wheel, in case something goes wrong. Of course, there could come a time where robots look after robots and we edge nearer to that whole doomsday scenario where humans become irrelevant. Fingers crossed that takes a while, though.

Either way, the real masters of machines will be the people who make them – not manufacture them, but design and engineer them. So AI engineering will surely become the booming industry for some time to come. The only trouble is it will also be a highly exclusive and competitive field, not to mention extremely technical. Better start learning now!

If you’re not going to join them, then you need to find a way you can beat them and that means looking at technology’s weaknesses. The aim here is to spot skills gaps in Artificial Intelligence. Can machine translators ever understand context? Will a robot ever be able to taste test its own food? Could an application ever help psychology patients more effectively than a human?

These are the kind of questions we’ll have to keep asking ourselves if we want to stay useful to employers. What can we do that machines can’t and won’t be able to for decades to come (if ever).

Get ready for a new kind of rat race

Humans will outperform machines in many ways for a long time yet – that’s not the immediate danger. More pressing is the numbers game: how many ‘human jobs’ will there be compared to people fighting for them? Competition will be fierce, the select few will be successful and what happens to the rest, nobody really knows.

In 50 years’ time the world’s population may be used to this and society may have fall backs. After all, we’ve done it time and again as technology has advanced. AI may be a new concept, in practice, but it’s only the next big thing in almost 300 years of big technology. It could even be a gradual process that eases us into the next stage of social evolution. Sadly, the rate of development suggests otherwise, though, and it looks like a new kind of rat race is approaching from over the horizon.

There is another theory some experts are suggesting: that AI might not be all that bad and machines could be the next stage in social evolution. Instead of putting journalists out of jobs, programmes will do the bulk for their leg work for them so all they have to do is a quick edit, take another sip of their coffee and sign off their 60th story for day.

Instead of putting surgeons out of work, AI could allow the greatest minds in medicine to keep saving lives even after their hands are shaking from old age. Or it could be the answer to the pending anaesthetist shortage that will put millions of lives at risk, unless a solution is found.

After all, how many articles do you see these days about the stresses of modern day life. Why not let the robots write that kind of stuff so we can all chill out with some yoga and mint tea? 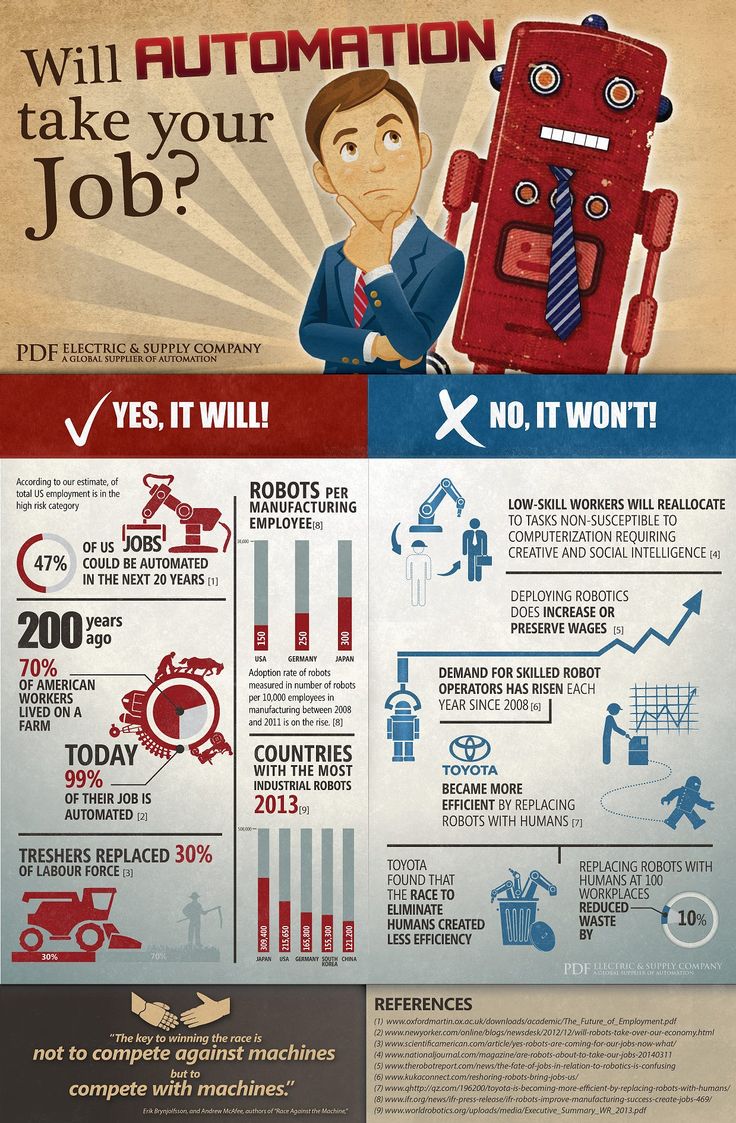